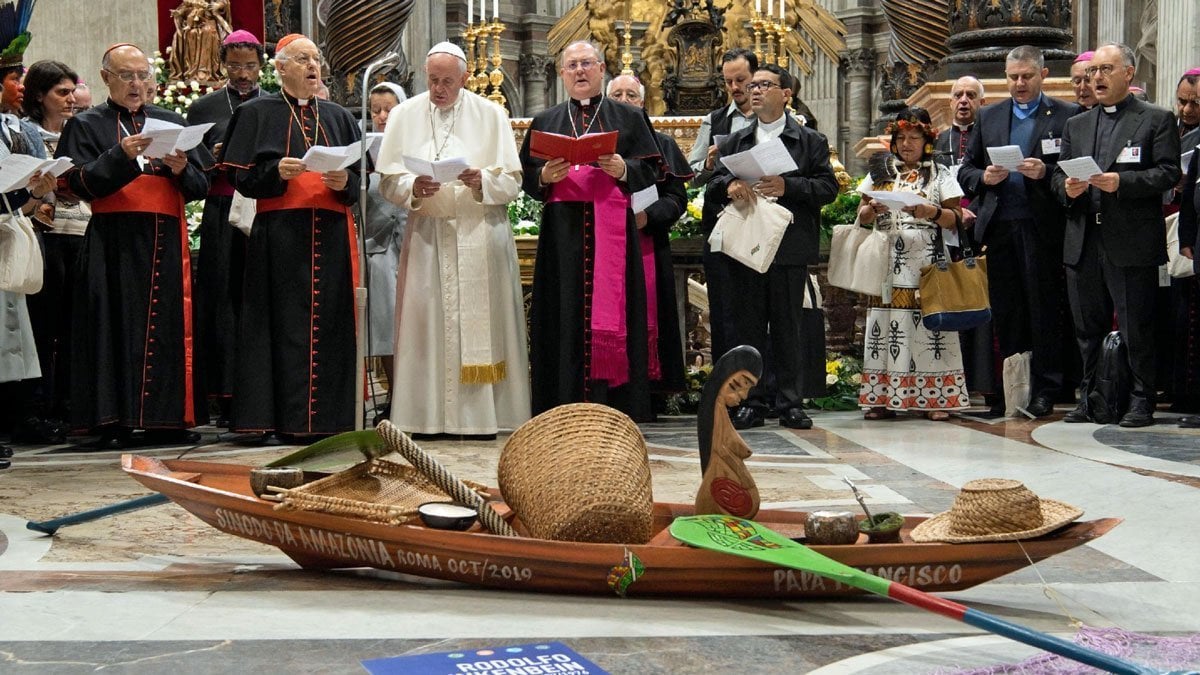 Pope Francis is remarkable. For a pope. He does just about everything wrong. In a more Christian era, he would be deposed, tried and burned at the stake, if he did not publicly recant his errors.

In this era of Modernism, Communism and Paganism, he seems like a genial old gentleman to those who do not perceive how truly contrary he is.

Here is a list of (some of) his known major errors, which you can use a search engine to find out more about. I may update this list later, or not. There is simply too much material to create a footnoted article in one go, and most traditionalists are aware of a good many of these errors already.

• The Pachamama incident – Pagan worship within the walls of the Vatican, assisted by Catholic clergy, including Pope Francis.

• Amoris Laetitia – A footnote to this document undermines the sacraments of Communion, Confession and Marriage.

• His response to the Dubia sent to him about the above document? – Silence.

• “Who am I to judge?” – His response when asked about sodomites.

• Traditionis Custodes – A map for the destruction of the Tridentine Rite.

• Death penalty – is no longer Catholic doctrine (he thinks.)

• Franciscan friars of the Immaculate – Evisceration of a pious Franciscan order, and the attempted appropriation of their wealth.

• The underground Church in China – Betrayed.

• Appointment of dubious persons to the highest positions in the Church.

• Renouncing the title ‘Vicar of Christ.’

• Condoms ok for the Zikka virus.

• His support for Emma Bonino, a notorious Italian abortionist.

• His holding of a blasphemous hammer-and-sickle crucifix, given as a gift by a socialist.

• No genuflection by him at the Consecration when he says Mass, but …

• He will bend down to kiss the feet of non-Catholics, publicly.

• Ripping a rosary out of the hands of a dead man.

• Trying to make an altar boy put down his hands joined in prayer, down right at the beginning of his pontificate.

The above are only the boldest of his offences. Why would any Catholic do the above, never mind a pope?

Answer: He does not believe as our forefathers believed. And he is pope!

It’s as if a police commissioner were facilitating lawbreaking, condemning the law publicly and hampering the few honest policemen who were trying to do their job properly; he is doing the opposite of what he is employed to do.

This may be Pope Francis’s purpose, from God’s point of view:

– To embody all the errors of his era;
– To prepare the way for the Anti-Christ, if he is not stopped, or …
– To promote true Catholicism, which is true Christianity, by being so obviously wrong that many more men of good will seek the right Faith of their fathers and thus …
– Prevent the Apocalypse arriving in our time.

— Pope Francis may simply die, possibly in a spectacular way, like Judas and Arius. If the college of cardinals doesn’t take the hint …
— He may be replaced by a more subtle heretic, who will undermine the Faith even more, and who will die in due course, as all men die, and then …
— There will be elected a good pope.

If Rome continues to sin so egregiously, it may be sacked; probably by pagans and/or muslims.

Why do I say that?

You may nowadays disparage no other religion publicly, except Catholicism. You will even be applauded. Hatred of Christ and his Way may combine with hatred of the revealed corruption of many clergy, to produce public violence.

Thus, it may happen that a new breed of Vandal may sack Rome and the pity of it is that most Catholics now living will not defend her; the heretical Catholics because they no longer care enough and the traditionalists because they are sick of the corruption.

– Attend the old rite exclusively, if you can.

– Educate yourself about our religion; be very wary of anything published after 1950.

– Find a good bishop, or priest, to rally around. Be generous to them with your time and money.

– Only support bad bishops or priests to the extent that you pay a labourer for a service rendered and no more e.g. if you go to the cathedral for confession, it’s proper to give something in return.

– Be hopeful; God is the ultimate Judge, and will bring good out of evil. A religion that undermines its ancient principles and practices is not going to survive long, but the holy Remnant will remain.

Now, at last, the enemy has openly declared war. Be sure, make certain, that you pick the right side in the coming tribulation.