Home / Catholicism / What Did Jesus And Mary Look Like? – Some Striking Images

“The Blessed Virgin had auburn hair, dark eyebrows, fine and arched, a very high forehead, large downcast eyes with long, dark lashes, a straight nose, delicate and rather long, a lovely mouth around which played a most noble expression, and a pointed chin.“ – Description of Our Lady from The Life of Jesus Christ and Biblical Revelations, (Vol. I, page 198) by Anne Catherine Emmerich.

Below is an image of Our Lord, extrapolated from the Shroud of Turin, and a picture of Our Lady of Czestochowa. The latter’s legends trace the icon’s origin to St. Luke the Evangelist, who painted it on a cedar table top from the Holy Family house. 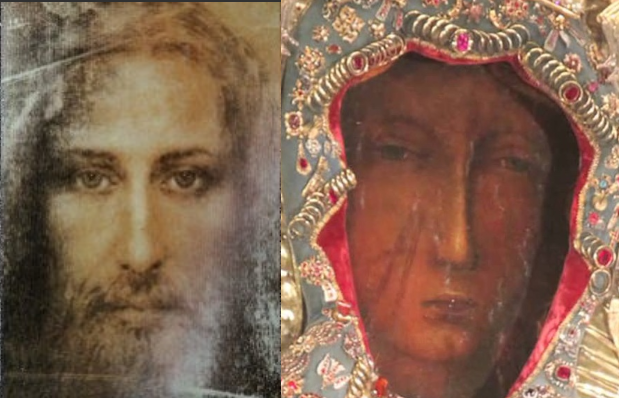 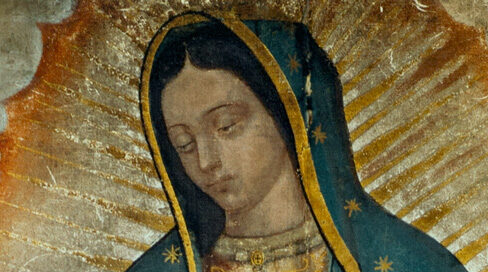 There is some overlap between the facial features in the two different images of Our Lady.

Conclusion: we may be looking at a reasonable approximation of how both Jesus and Mary appeared in life.

And now, for something even more speculative, but interesting:

This is an image purportedly taken from a time-viewing machine called a Chronovisor. It contains a likeness of Our Lord. 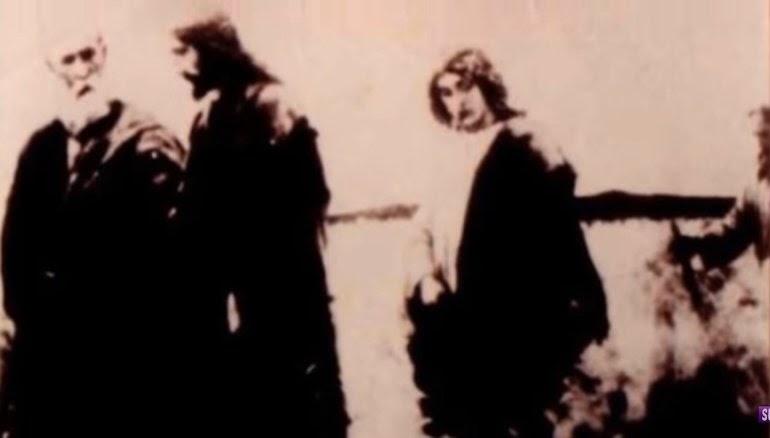 Certainly, it could be a mere confection, as it seems too perfect:

– There is a handsome young man following Him who could be St. John.
– The non-Christ persons depicted remind me of images dating from c. 1880-1920.
– It looks like a still from an old B/W film.
– The young man is beardless, which would not be normal for the time.
– They are walking in what looks like a field of corn; too perfect, if you know your Bible.

But then, these were not normal men; they were outsiders, and St. John was an unusual man, if you go by legend, and his own Gospel; his style is quite different to the other Evangelists. Christ set St. John apart from the other apostles and he was the only one who wasn’t martyred.

He was also very young when he followed The Lord; I’m not sure how many young men can grow a full beard aged 16 – 20.

A similar-image search via Google only brings up versions of this image, so it’s not an obvious reproduction of a painting or similar.

It is thrilling to think there’s even a small chance it might be real.

To the skeptical reader of the above and also to the credulous, and to seekers of truth:

All questions we have will be answered when we die, to the satisfaction of the saved and the everlasting chagrin of the damned.

The living should be careful of being diverted from their personal path up Calvary. If in doubt, go the more monastic route.

We Catholics should not be seekers of mere phenomena, as the pagans are, but neither should our religion be iconoclastic, like Islam and Protestantism. Private revelations can help your faith, or divert it.

Any private revelation that contradicts approved Doctrine in any part should be studiously avoided.

The above is merely offered to inspire the living faithful and men of good will who seek The Lord in spirit and in truth.

Many people are now recording and disseminating near-death experiences (NDEs) and visions of Our Lord. Eventually someone with professional artistic ability will paint a picture of Him. Then someone else will. And then another.

Coupled with relics like the Mandylion and the Veil of Veronica, an accurate likeness will eventually be arrived at.

Indeed, this has probably already happened, as early images of Christ were not like the later icons. Someone or something, (like the relics mentioned above) caused the image to be standardised to the long-haired, long-faced, bearded man we are familiar with today.

There are other images which vie for the title of True Image (Vera Icon, from whence we get the personal name Veronica). I’m aware of them. Not all can be deemed worthy of consideration, if only because the images vary too much; they can’t all be accurate.

One also has to separate the images which are said to be direct copies of Jesus’ face, and those which are artistic compositions, or (divinely sanctioned) works of propaganda.

‘Them up there’ will appear in the most efficient way, at a particular time and place, to accomplish their overarching purpose: the saving of human souls from the fires of Hell.

They will not appear in a mission territory in a way which disturbs the locals too much, and they may adopt local dress and features, to make a point.

Photographic accuracy is entirely secondary to this goal.